Roses grow on you 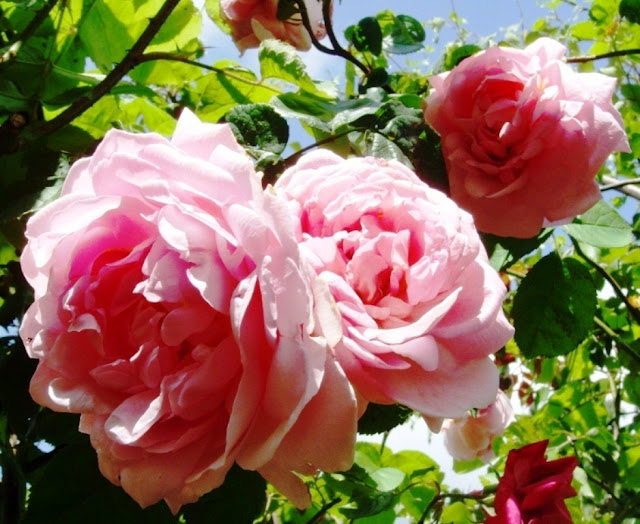 As the late, great, gardening guru Christopher Lloyd once wrote, the best way to fill your garden with plants is to 'find out what grows well for you and grow lots of it'.  Well, it's taken a good few years of trial and error in the heavy clay soil of my south-east London back garden to find out that in June and July what grows best for me is -  roses.

Ironically, it was Lloyd himself who controversially dug up his late mother's rose garden at Great Dixter, to plant an exotic garden full of sizzling, sun loving annuals and tender perennials.  If only I could have done the same!  Roses don't mind my clay soil which, although back breaking to dig, can be rich in nutrients. But that's not all I have to contend with.  My back garden is also North-facing, shady and, in most summers, very, very dry.  The north facing aspect came with plot and there's nothing can change that; it means there's sun only from February to October.  The shade is partially self inflicted - I would have a fig tree.  Ripe figs for breakfast is my idea of earthly paradise.  The drought is a combination of summer hose-pipe bans and the next-door-but-one neighbour's pestilential Eucalyptus tree.  These notoriously thirsty antipodean thugs were planted in Botswana to clear a swamp and now they've got a desert!  I rejoice that anything at all will grow but have had to accept that sun-lovers would soon begin to sulk and tender exotics wouldn't stand having their feet in sodden, wet, winter clay. So, I've learnt to love roses.  If they're not your cuppa tea look away now! 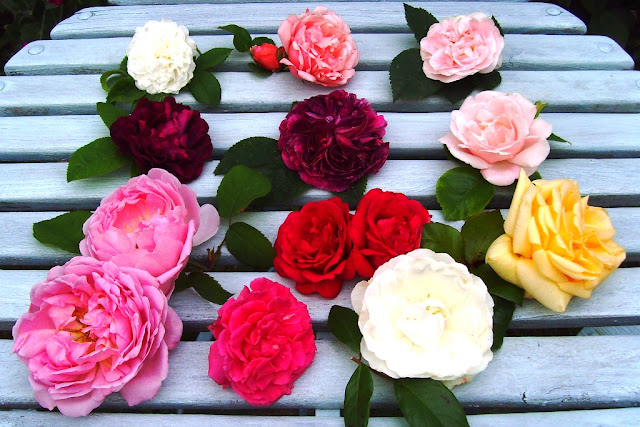 I've been pretty lucky with my selection - chosen for a combination of scent, colour, flower-form, habit and, in some cases, just the name itself and they've all done well.  With over fifty metres of fence to cover several of them are climbing varieties. 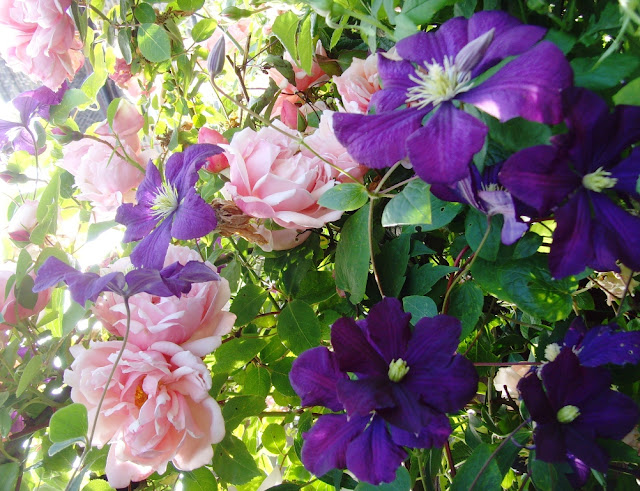 Here's Rosa Albertine, a vigorous rambler, with a shade tolerant clematis 'Etoile Violette' growing through it.   It's on a west facing fence so gets the most of the afternoon sun but I like it best when, as here, it filters the morning light. 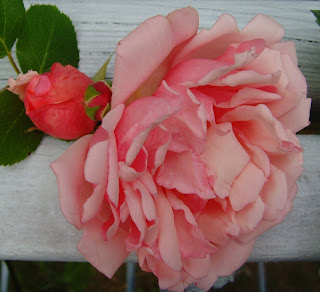 I particularly love it's darker buds which remind me of ripening strawberries. 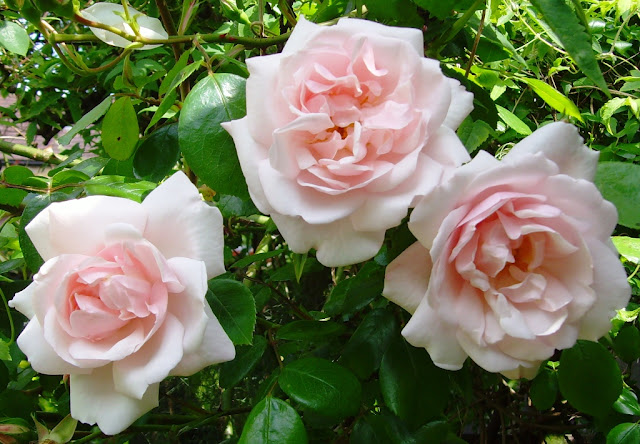 A less vigorous but equally reliable climber is Rosa 'New Dawn' which was developed after the Second World War and named in the spirit of hope and regeneration.  With its soft colouring and gentle, fruity perfume it will happily grow in partial shade - and even flowers its heart out under my fig tree. 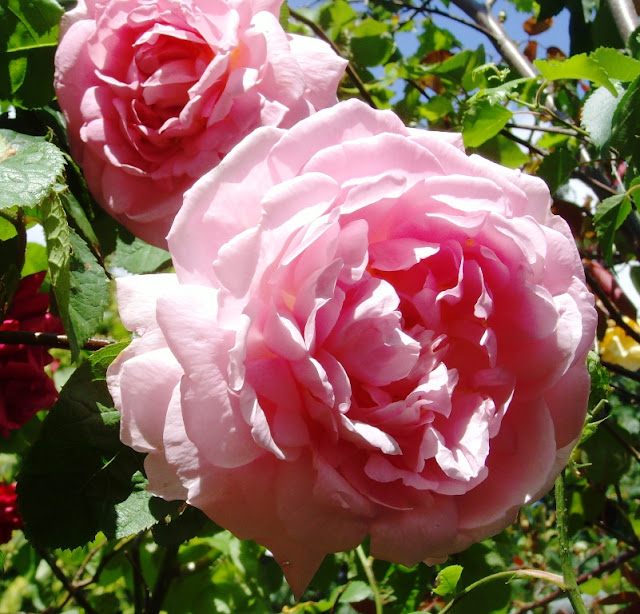 This eponymous beauty - a tall, arching climber, was named for the grande-dame of 1950s flower arranging Constance Spry.  The large, fully-cupped blooms remind me of vintage furnishing fabrics - over-stuffed sofas and comfy armchairs.  It has an oddly pungent spicy scent - more ointment than perfume - like something my grandmother would have rubbed on a bruised knee.  It too is happy in partial shade, the flowers lasting longer than in full sun. 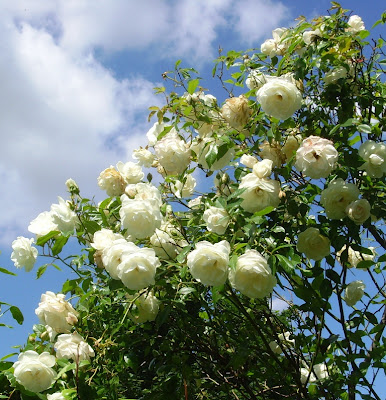 As a Yorkshire lass I had to have a white rose and although this climbing version of the old favourite floribunda Rosa 'Iceberg' is not the traditional white rose of York (Rosa Alba Semiplena) I would choose it every time for its generosity of flowering which often goes on well into December when there's no sun at all in the garden. 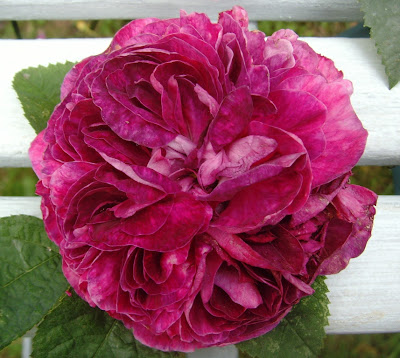 Now for the shrub roses.  I chose this Gallica, Rosa 'Charles de Mills', for its decadent look of crumpled silk and its swooning old rose perfume - perfect for pot pourri or rose petal jam (all roses are edible but cut off the slightly bitter white bit at the base of each petal first).  Gallicas are some of the oldest roses and are noted for their tolerance of drier, poorer soils. Albas, such as Maiden's Blush and Madame Legras de St Germain won't mind partial shade.  Old-fashioned shrub roses aren't fussy as to pruning like some of the modern hybrids so they're easy-going for a beginner or a lazy gardener.  They're also more resistent to pests and diseases than the modern hybrids so you can put away the chemical sprays and go organic. 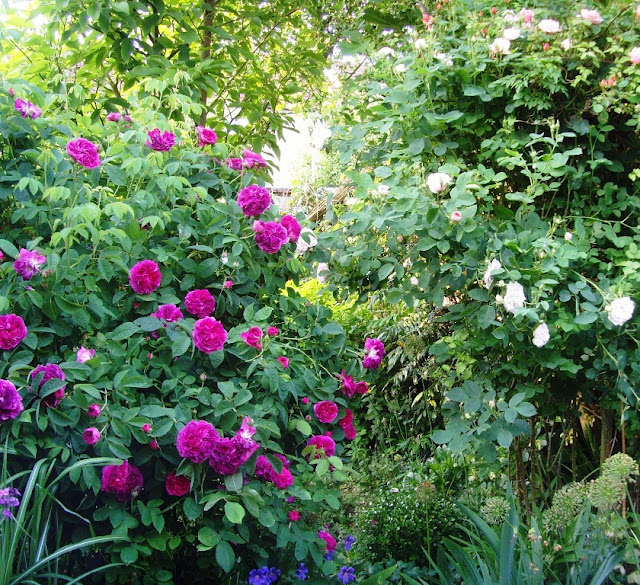 Here's Charles de Mills with the shell pink alba Rosa 'Maiden's Blush' on either side of a narrow path.  Maiden's Blush has other less demure names too which might just have made a shy maiden blush once upon a time: Cuisse De Nymphe (nymph's thighs) and La Seduisante (the seductress).  It smells sublime - unlike the onion-scented alliums planted underneath to deter greenfly.  Swings and roundabouts! 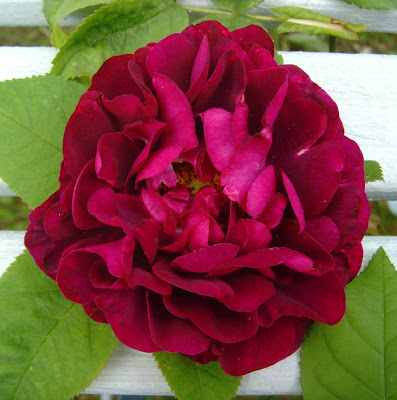 Rosa 'Tuscany Superb, another Gallica,' isn't the most highly scented of the old roses but what it lacks on the nose it makes up for on the eye with its darkly sensuous colouring.

Well, now for the basketry.  If you're traipsing out of a mid-summer's morning to gather rose-buds you'll need a rose gatherer to put them in.  Here's one, based on a Catalan platter, made earlier for 'Practical Basketry Techniques' from two colourful varieties of willow.  Its wide, flat base and high, rounded handle is perfect for carrying roses without crushing them. 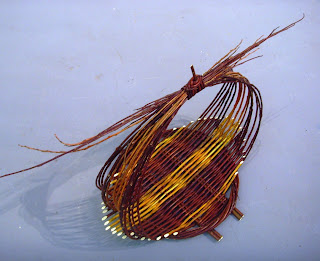 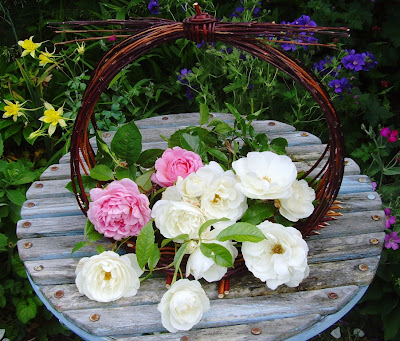 It would make a lovely old-fashioned table setting for a summer garden party too.  Not sure though what the redoubtable Constance Spry would have made of my attempts at flower arranging!
Posted by stella harding at 09:53 2 comments: