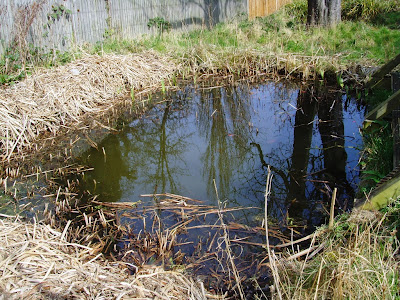 Spring did indeed come to south east London down at Devonshire Road Nature Reserve last weekend (see previous post) with sunshine, blue skies and a gentle breeze - all a welcome change to the leaden gloom and arctic sleet we thought would never end. The frogs were spawning in the wildlife ponds and the honey bees in their nearby apiary were having a buzzy day spring cleaning the hives of winter debris. 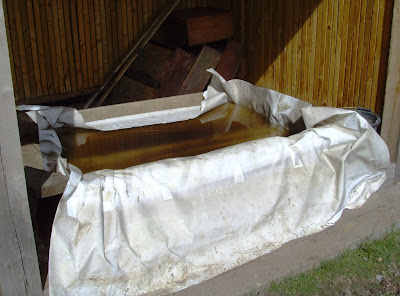 Jake, who'd organised the basketry workshop I was running there, had rigged up a fine impromptu willow soaking tank from an old packing case lined with plastic sheeting.  It worked a treat and the brown willow was beautifully conditioned after a few days soaking and mellowing under wraps in the green oak shelter.
The students, all beginners to basketry, were an enthusiastic bunch and it felt like the spring air lifted the spirits and gave everyone that bit of extra creative oomph.  As the workshop progressed I certainly got a good feeling about what they would produce.

Buff willow gathering basket with bands of colourful 3-rod waling illustrated in Practical Basketry Techniques.
The recipe du jour (instructions for making baskets were traditionally referred to as recipes), similar to the one illustrated in Practical Basketry Techniques, was to be a round gathering basket using French randing as the basic side weave.  This is an attractive and economical weave that I think is pretty straightforward for most beginners.  It does require a fair bit of space though so it's not such a good choice in cramped surroundings. 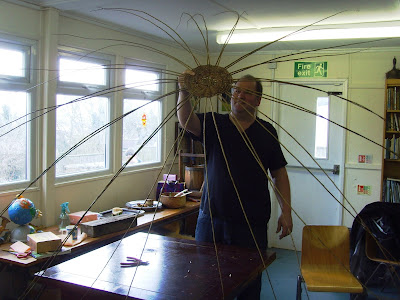 Here though we had the luxury of a spacious but cosy crafting space where everyone could spread out - as Jake demonstrated with his 3 metre wide spider of a staked up base.  Not the sort of scary wild life you'd like to come across on the nature reserve - the spider that is, Jake's not really scary at all! 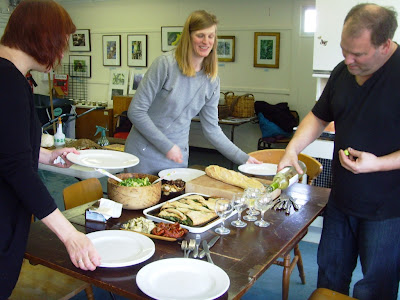 Lunch on Saturday was a chance to relax with a glass of wine and discuss recipes of the foodie kind.  Pasta Verde from Liguria made with spinach, eggs, Parmesan, and rice accompanied by artichoke hearts, sun dried tomatoes, pickled mushrooms and olives.  The antipasto was from the local supermarket deli but the olives were from the tree in Jake's front garden.  Now there's a bonus of global warming - ripe olives in south-east London! 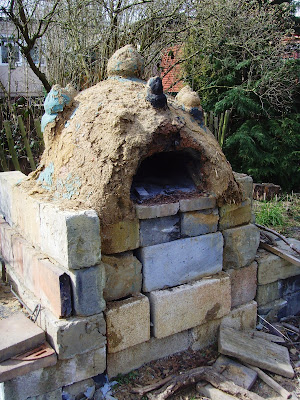 The clay pizza oven on the nature reserve 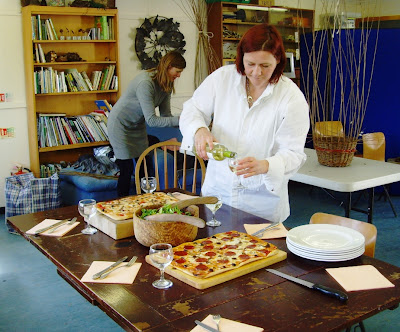 After a hard morning upsetting, 3-rod waling and French randing Sunday lunch on day two was home made pizza with Pinot Grigio.  Basketry has a long association with the gathering, storing, preparation and sharing of food - a fundamental part of the gift of life itself - and the development of our social nature. 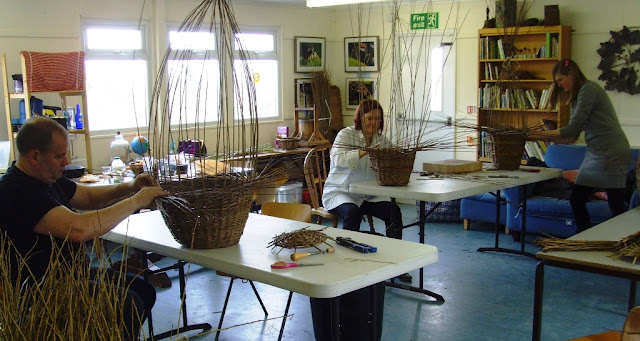 Fortified by a good lunch and relaxed as newts three of the basketeers were keen to try a spot of slewing and reversed French randing - not something normally tackled by beginners. (Next time we'll try reversed slewed French randing - trying saying that after a few bevvies!) 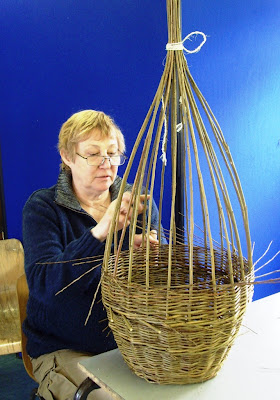 Maggie though stuck with the plain French randing interspersed with strengthening bands of 3-rod waling and concentrated instead on controlling the flow of her side stakes - so beautifully spaced, all ready for the top wale and a three-rod border to finish. 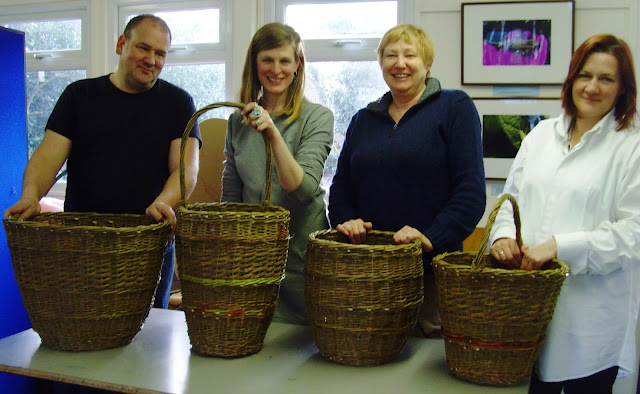 And here they are all finished in time for tea.  All different, all saying something about the individual hands that made them.  Jake's large and generous, Kate's tall and quirky, Maggie's strong and considered, Debbie's practical with a colourful streak.
I thought they were all brilliant and went home tired but happy.  I put it down to the spring air, I don't think the wine had anything to do with it at all ... (hic!)
Posted by stella harding at 09:49 1 comment:

I'm still not convinced Spring really has come to South-east London but the daffs are out and the willow is in the soaking tank ready for a weekend of basket making at the Devonshire Road Nature Reserve in Forest Hill.  Tucked away behind a road of suburban semis is this nine acre hidden gem of native woodland, wildlife ponds and nature walks.  Complete with a spacious but cosy crafting space, fire pit and a green roofed, oak shelter it's perfect for spring basketry.

If you'd like to join us please contact the organiser Jake Twyford.  No previous experience necessary, all materials and tools provided and Jake will be cooking the lunches on site over the weekend - so that you can relax into the weave and forget for a while whatever's happening in the world outside.  Take home a basket to gather fruit and veggies or just to gather your creative thoughts for the coming season.
Posted by stella harding at 09:45 No comments: