Christmas has gone and the New Year is just beginning.  Midwinter can be a bleak, slack time in the garden.  If you're a tidy-minded gardener you'll have cut down the stems of perennial plants, swept up fallen leaves and mulched the borders leaving only the structural outlines of ornamental shrubs and evergreens for seasonal interest.  Alternatively, you might be the sort of hopeless romantic who prefers to leave everything to overwinter in the hope that a sharp hoar-frost will delicately trace the outlines of tall grasses and seed heads.  Either way you probably won't have a lot to do outside for the first few weeks of the new year.  So, rather than stand with your nose pressed against a cold window pane wishing you could be outside, this is a great time to hunker down with a nice warm drink, a plateful of hot-buttered things and a crafty project to get you dreaming of spring plantings and summer crops.

As the new season's seed and bulb catalogues come plopping through the letter-box, don't throw out the old ones, you can recycle them instead into a plaited container for your seed packets or plant labels. 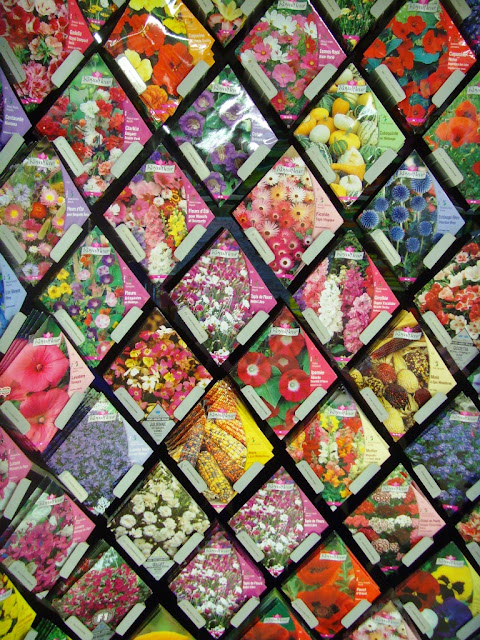 Colourful seed packets can be a wonderful source of inspiration - not only for planting schemes but for all manner of creative projects.  This lattice display in a DIY store gave me the idea for a bias plait basket made from glossy plant catalogues that were just too sumptuous to put in the recycling bin. 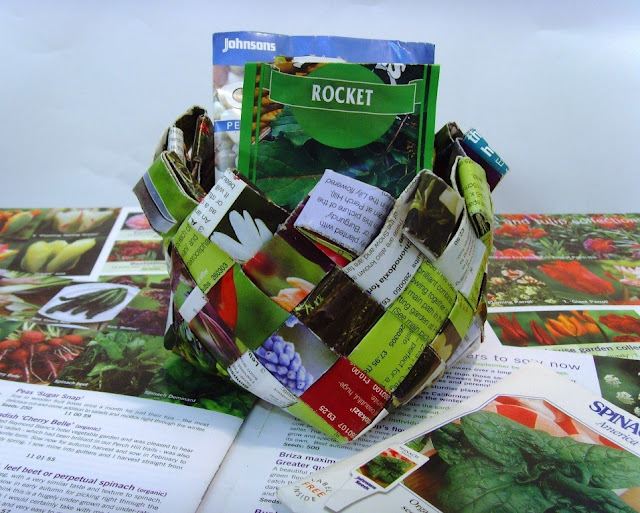 Folding the paper length ways into strips makes for a sturdy long-lasting basket and the fold-down border accentuates the bias-checkweave design.  It's a quick and simple re-cycling project for a cold and rainy day and just the thing to chase away the January blues. You'll find the full recipe in my forthcoming book 'Practical Basketry Techniques' published by A&C Black.
Posted by stella harding at 16:44 No comments: 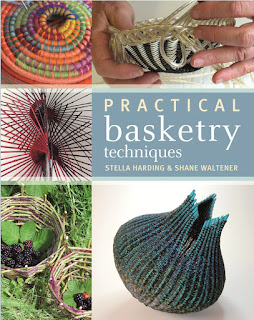 Front cover of Practical Basketry Techniques
Christmas is coming and I've decided to ask Santa for a copy of 'Machiavelli's Lawn: the Great Writers' Garden Companion' by my friend Mark Crick; writer, photographer, cook and erstwhile gardener.  This is a follow-on to his two previous books, 'Kafka's Soup: a Complete History of Literature in 17 Recipes' and 'Satre's Sink: the Great Writers' Complete Book of DIY'.  All take the form of a collection of literary parodies of great writers.
As the publication date of  'Practical Basketry Techniques' approaches my mind is turning to thoughts of what anyone might have to say about it.  I've already been asked by A&C Black's publicist to supply names of potential reviewers.

I sat next to Mark a couple of weeks ago at the Royal Albert Hall for a concert of Mahler's 8th Choral Symphony.  He was signing a copy of 'Sartre's Sink' for a friend in the row behind and, just before the orchestra struck up, I made the mistake of having a quick look.  He had pre-empted any adverse criticism by compiling a list of spoof reviews which appear on the back cover:

'Not worth the wait' - Samuel Beckett

I had to stifle my giggling fits all the way through the concert! - the 8th is one of Mahler's less sombre works but still not exactly a bundle of laughs.

What I found even funnier was that, after the show, Mark told me how his American publicist, who didn't 'do' irony, had tried to persuade him to make the reviews a little more up-beat.

'But Mark, these just sound so negative, we don't wanna put people off buying it!  Couldn't we say 'Worth the wait', by Samuel Beckett instead?' 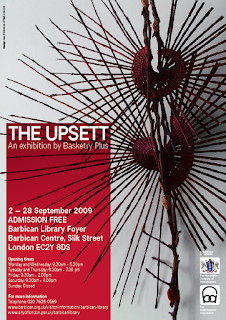 I took part in an exhibition with Basketry Plus at the Barbican a couple of years ago.  We called it 'The Upsett' which is a technical basketry term.  We liked the slightly negative hint of provocation in the double meaning.
Well, you can probably guess where this train of thought is heading. 'Practical Basketry Techniques' by Stella Harding and Shane Waltener:
'Upsetting' - Basketmaking Monthly
Posted by stella harding at 14:46 No comments:

In the previous post I mentioned my small garden in south-east London.  If my garden were a car it would have to be a Smart car; compact, eco-friendly and with just about room for two at a squeeze.  But maybe I should own up and admit that my 'other garden' is a stretch Limo, well, more of a Rolls Royce actually - nothing so naf as as a Limo.

I've been a member of the gardening team at Restoration House in Rochester for a few years now.  The Grade I listed house gets its name because Charles II stayed there on his return from exile after the English Civil War.  The house is more famous though for having been the inspiration for Miss Havisham's Satis House in the novel 'Great Expectations' by Charles Dickens.  Look out for a new film starring Ralph Fiennes - coming soon. 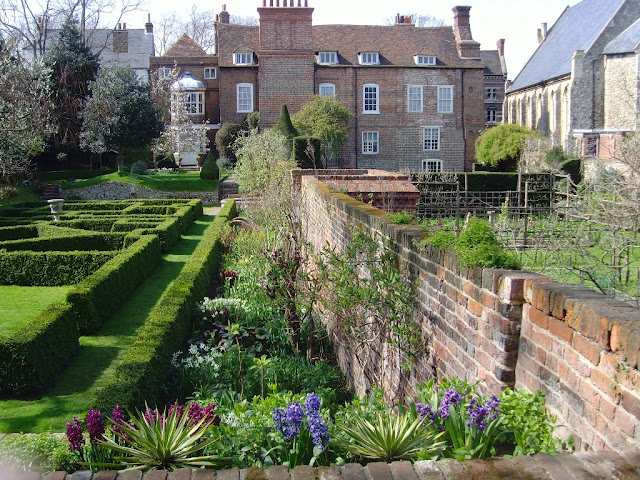 This is a view of the house and garden taken in spring showing the box parterre on the right and veggie garden over the wall on the left. 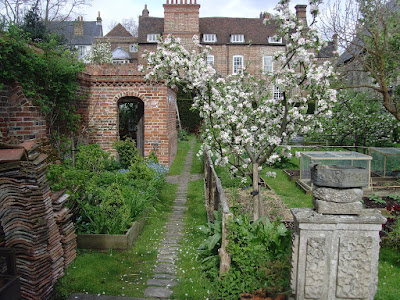 This view shows the small greenhouse where seeds are sown for all the summer annuals to be planted out in the cutting garden. One of my regular jobs was tending the cutting garden which provides all the fresh flowers for the house - deftly arranged in his own inimitable style by owner Robert Tucker. 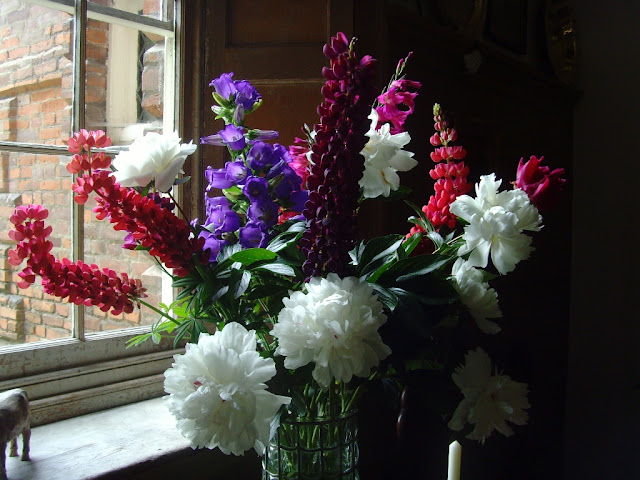 When the house first opens to the public in June soft, billowing combinations of peonies, lupins and Canterbury bells make for a classic English cottage-garden arrangement. 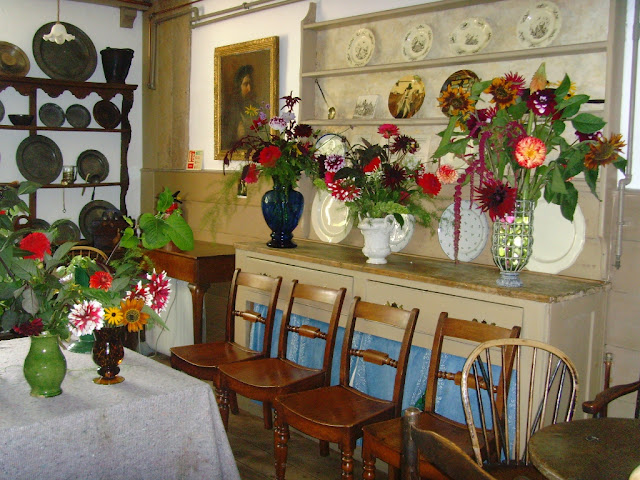 In high summer, when the dahlia's, annual sunflowers and amaranthus (love-lies-bleeding) come on stream, the arrangements head down Mexico way and turn hot and zingy!
It's sometimes kinder to tell little white lies when tourists ask whether the same flowers would have been grown in the garden when the reclusive Miss Havisham was there.  So, rather than shatter the romantic illusion and reveal that she was a fictional character who never existed, we reply, 'Ofcourse.  Miss Havisham simply adored Dahlias!'
I persuaded the co-author to do some photogaphy in the garden when we were working on a gathering basket for 'Practical Basketry Techniques' - out February 16th 2012.  The veggie garden, brimming with autumn produce, provided a colourful backdrop. 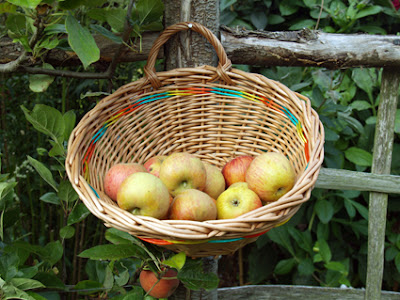 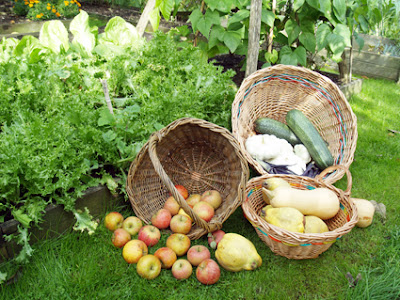 I was once at a dinner in London hosted by a green-fingered friend where a rather smart-looking lady gardener asked me the question:
Lady: 'Do you garden?'
Stella: 'Yes, I love gardening.'
Lady: 'And do you have your own garden?
Stella:  'I do.'
Lady: 'Is it large?'
Stella: 'Oh, about fifteen by twenty.'
Lady: (looking impressed) 'Acres?'
Stella: 'Erm, no. Feet.'
Lady: (triumphantly) 'Ah, then you don't garden!'


I'd failed to appreciate the subtle nuance in her use of the verb 'to garden', which implies the management of rolling acres and, no doubt, teams of fore-lock tugging under-gardeners and I'd confused it with my love of 'gardening' in my tiny back yard.

If you are passionate about your garden then size really doesn't matter.  If all you have is a balcony, a patio or a few pots on a windowsill you can still be a crafty gardener and make something for or from your garden. 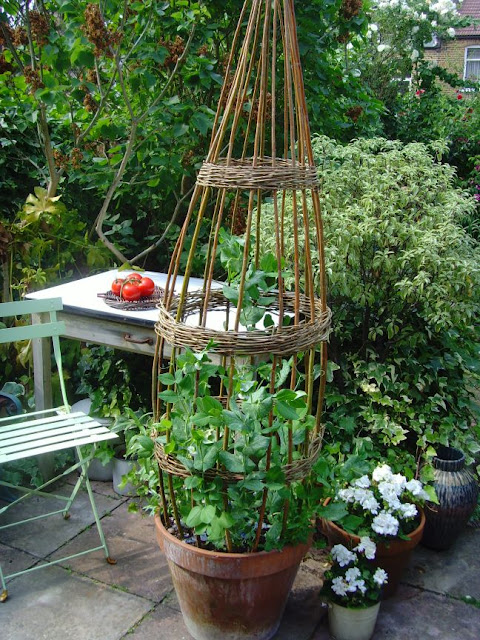 If you want to try growing fresh peas but all you have is a pot on a patio you could make a crafty plant support from willow, hazel or any other long slender rods woven around with something finer and more flexible.  This was a project that didn't make it into the book 'Practical Basketry Techniques' - the co-author didn't like the shape.  I can't imagine why not ...  Anyway, that meant I got to keep this one and the sugar snap peas were a delicious addition to summer salads and stirfries.

We made another version for the kindergarten at a local school, as a plant support for the sweet peas the children had sown in a large wooden planter.  I made a plaited and twined willow dragonfly to hover on top. 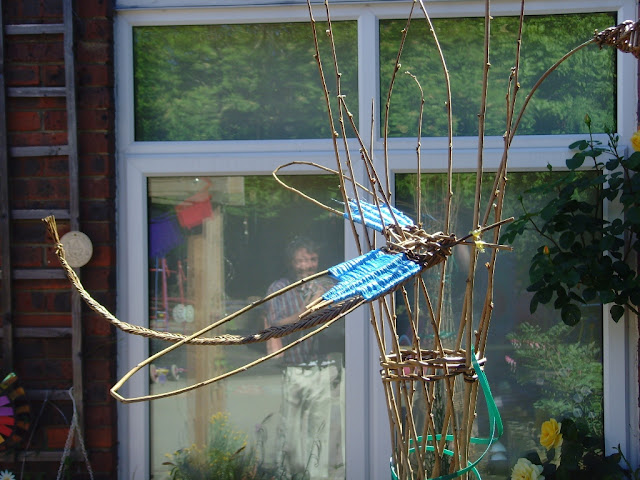 Co-author not overly impressed by this one either (made with hazel pea sticks bought from a car-boot sale) but the children loved it. 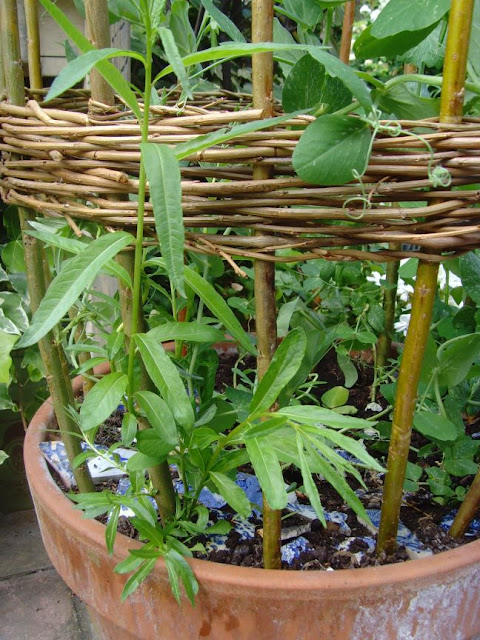 Later that summer I noticed that the green willow rods we'd used as uprights had taken root.  I've now got a living willow structure - in a pot. Blooming marvellous!  And, nothing wasted, the blue and white willow pattern china I'd used as a decorative mulch provided inspiration for another project.

Posted by stella harding at 11:49 No comments:

LOVE CRAFT, LOVE GARDENING? you are in the right place 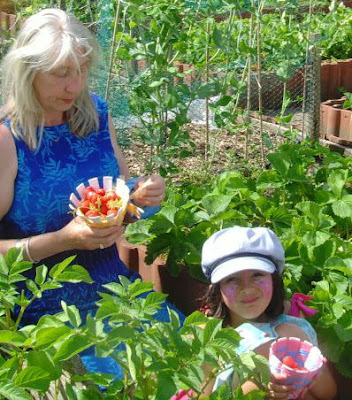 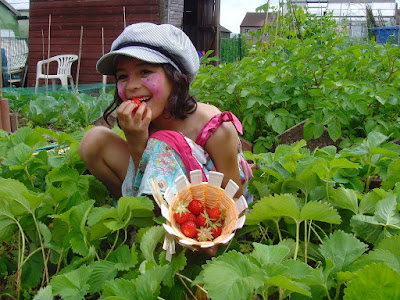 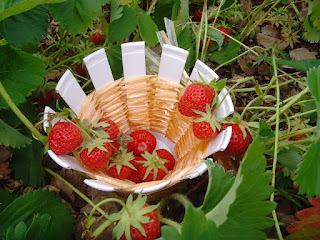 You can find out more about how to make a recycled pottle like this in 'Practical Basketry Techniques' by Stella Harding and Shane Waltener.  Published by A&C Black - out in the UK 16th February 2012.  USA May 12th.

Posted by stella harding at 12:05 No comments: